The day has come.

My first time on Radiator Springs Racers was on June 10th, 2012. This was a Preview day for the attraction. My very first ride, I lost my hat. It was recovered and I got it in the mail 2 days later. I also found out they had a single rider line. I ended up with 7 rides on that day. I did not plan to go on the ride 10,000 times. A couple things happened to start me towards this goal. After ride 999, the cast members were waiting for me at one of the unloading areas. Five of them jumped in the car for ride 1,000. That spurred me on to reach 2,000. The local ABC news came out to cover that ride. By that time I was on my way to becoming friends with several cast members. Their support kept me coming back for more rides. It was after the 5,000 ride that I knew I wanted to reach 10,000. It is a good round number. I also told the OC Register reporter about obtaining that goal.

This year was the most crowded of all the years of racing. I went on 2823 times in 2016 but only 1610 times so far this year. The secret of the single rider line is no secret. I arrived as usual when the parking structure opened. My friend David Crown took me to breakfast at Rainforest Cafe. We came into the park and went on Guardians. This was number 107. I wanted the 10,000 to be very special and these are my friends I was lucky enough to ride with. Carlene Beckius, Catalina Simpson, Heather Hebenstreit, Rosanna Hughes and Meli Carlos.

I first met Carlene back in 2013. It was right after I went on Racers for the 300th time. One of the managers had the cast members clapping when I came back after the ride. I asked to get a photo with the crew, and Carlene was one of them. I was also lucky enough to have her in the 1,000 car with the other cast members. When I reached the 3,000 ride, Carlene came in on her day off so she could ride with me. She was in the front row and I was in the back. She took some selfies of the ride. Since then, I’ve made sure she was able to ride in all the big milestone cars. She has always had a knack for knowing how many rides I have during the day or if I was in a certain color car a few times in a row.

I also got to know Catalina in December 2013. On the 2,000 ride, there was an empty seat and I asked if Catalina could get in the car. Besides that ride, she has been in the 4,000, 5,000, 6000, 7,000 and 8,000 Cars. Catalina also invited me to her wedding. I could not make it because I could not get the day off from work. She always had something nice to say every time I came to the ride. She and her husband Deane have a 5-month-old little girl. Sierra is very cute. The few times I’ve gone to visit them, Catalina tells Sierra, this is your “Uncle Jon”.

Carlene and Catalina are my “Besties” at the ride. Their support and motivation have helped me along the way. They have taken countless photos with me. They have never said no to a selfie. Even on days, they did not think they looked their best. They are still 10 times better looking than Ian on my good days. I’ve been lucky to know them away from the ride. From watching them play softball to going to dinner and movies. They have been the best “sisters” I could ever hope for. I always wish them the best in all their future endeavors.

I’ve known Heather the longest. We worked together at HRTV. She now works with the Main Street Trolley horses in Disneyland. It’s fun to go see her working there. I’m also friends with her Mom Dorise. I’ve gotten to go to their house for Christmas and 4th of July parties. She was also in the 8000 and 9000 Cars. She is also a great GoPro operator.

Rosanna is the cast member who always blames me for the ride breaking down. Jokingly of course. She points her finger at me and tells me “to behave” after the ride has experienced a downtime. I’m glad she was able to ride with us today.

Meli is another of my good friends at Racers. She always welcomes me with a “Lucky Hug”. She is always amazed how many rides I can get when the single rider line is short. She was also in the 7000 car.

So at around 12:15 pm, I got all my riders together and we got into car red 4. We were on Luigi side for the race and won the race. Carlene and Heather held my 2 GoPro cameras. There were also several of my friends taking pictures and videos. We got post-race pictures and I got a little emotional as I gave each one of my co-riders a hug. I’m the lucky one who got to ride with these awesome ladies. I also got photos with my other friends who came out for the milestone. And my friend  Karen gave me a hat with Mr. 10,000 on one side and 11/13/17 on the other. Best gift ever.

Then I went with my friends David, Heather, and Dorise across Harbor Blvd. to meet Greg Lee. He is a reporter with ABC7 LA. He did an interview of the big ride. Pretty cool.

Went to lunch with David, Dorise, and Heather. After, we went on Racers, Luigi’s and then Guardians. I did a Skype interview with Cal State Fullerton TV news. Went on Racers one more time. I’m now at 10,002.

It was a great day. We will see what the rest of the year holds for me. I know I need to reach 10,101 on December 8th with the Cree Family, coming down from Oregon. And continue on from there.

Back row: l to r: Meli, me, Rosanna
Front: Heather, Catalina, and Carlene. 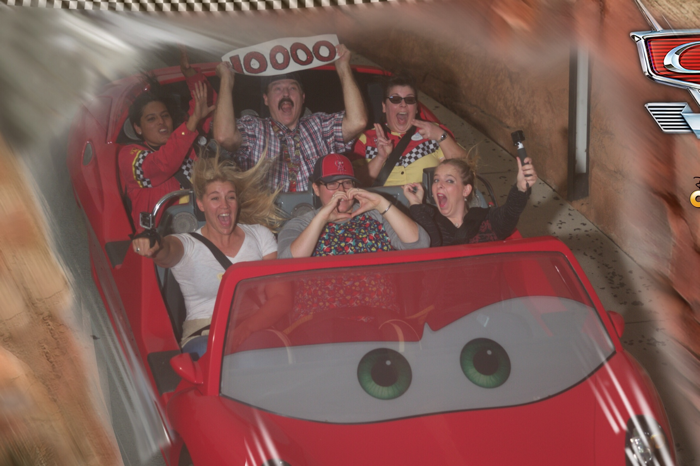 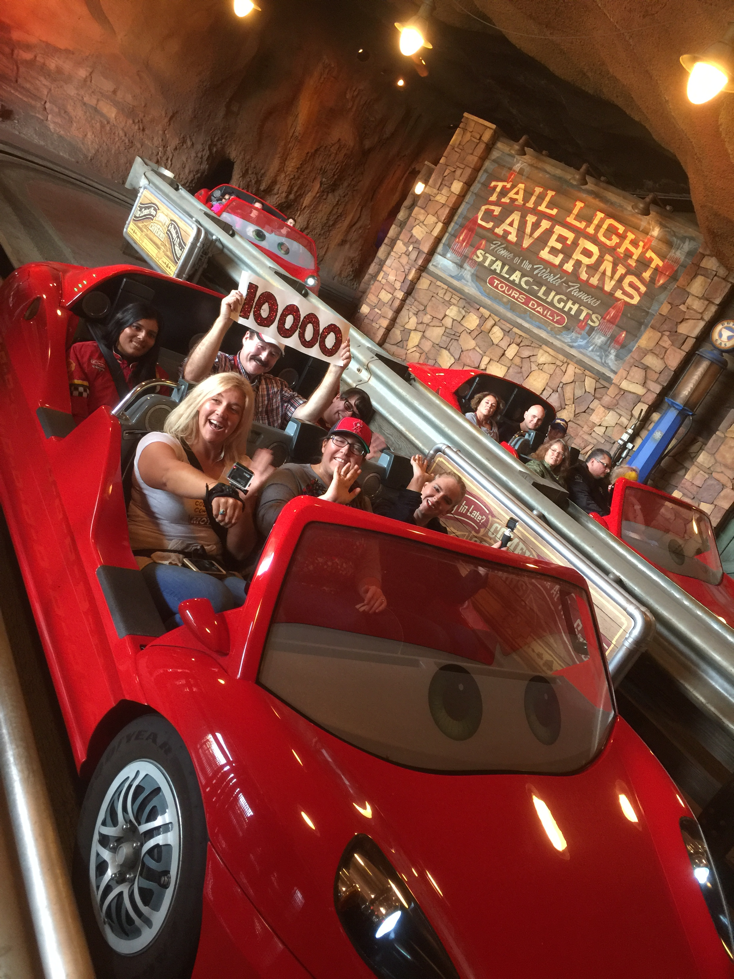 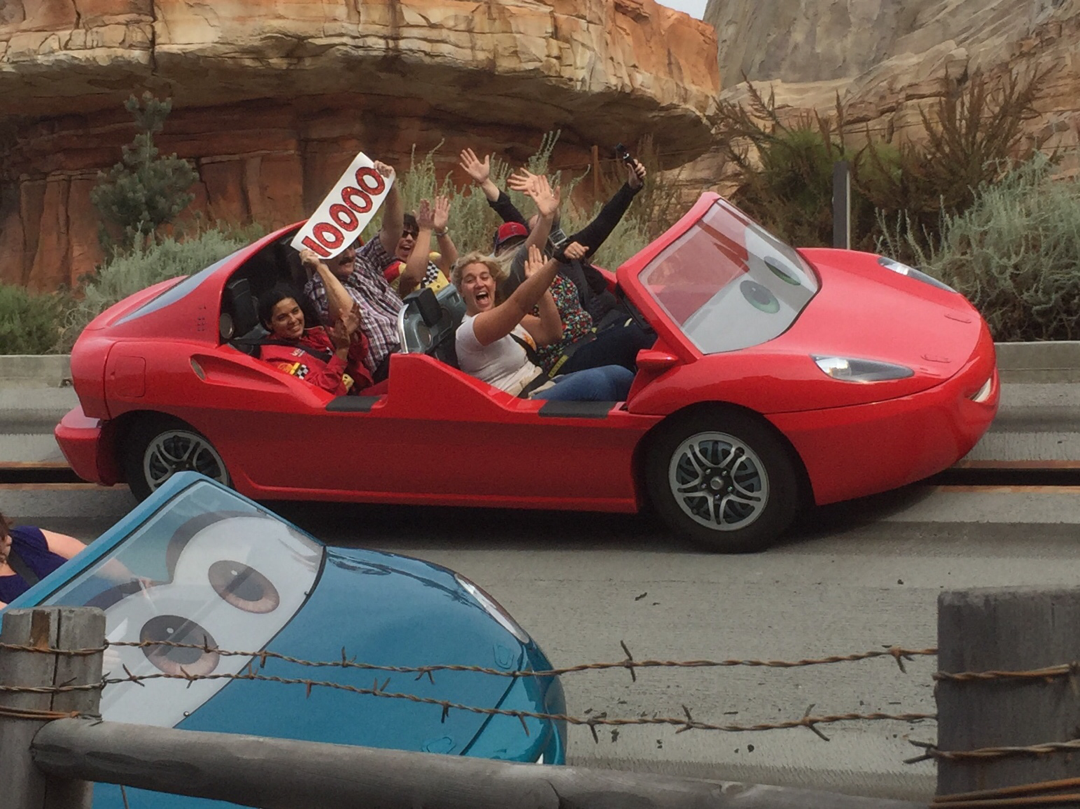 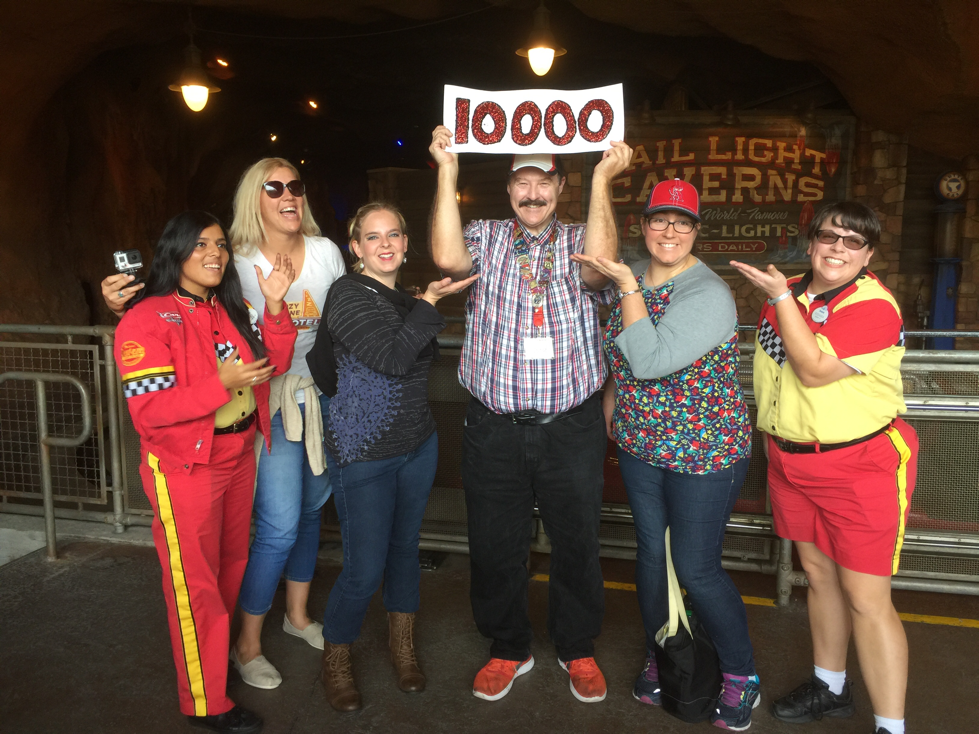 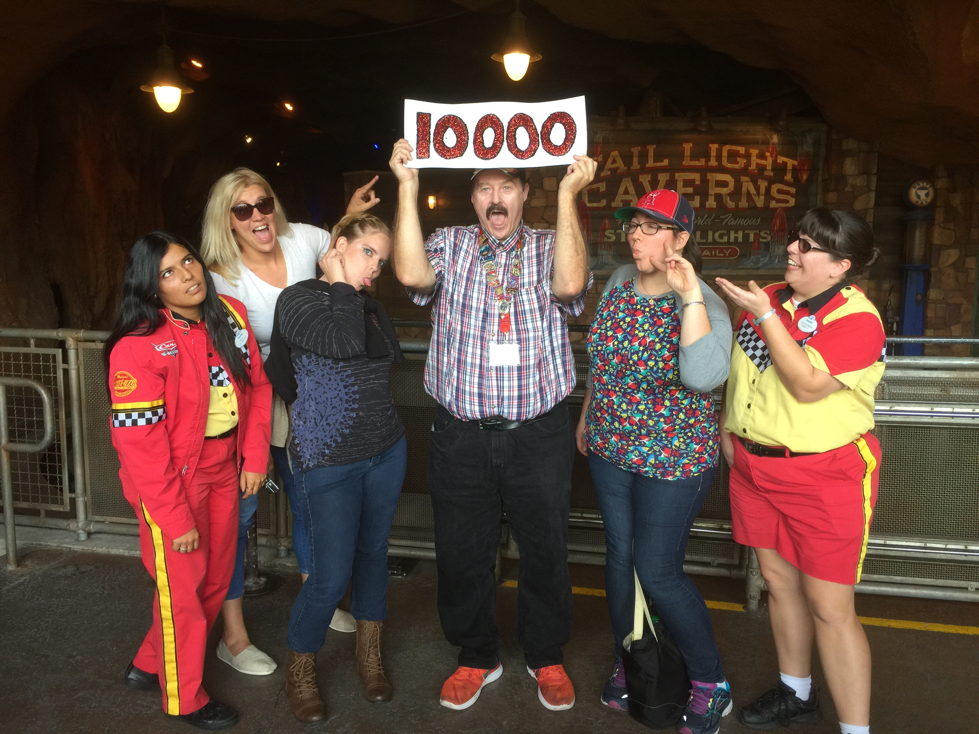 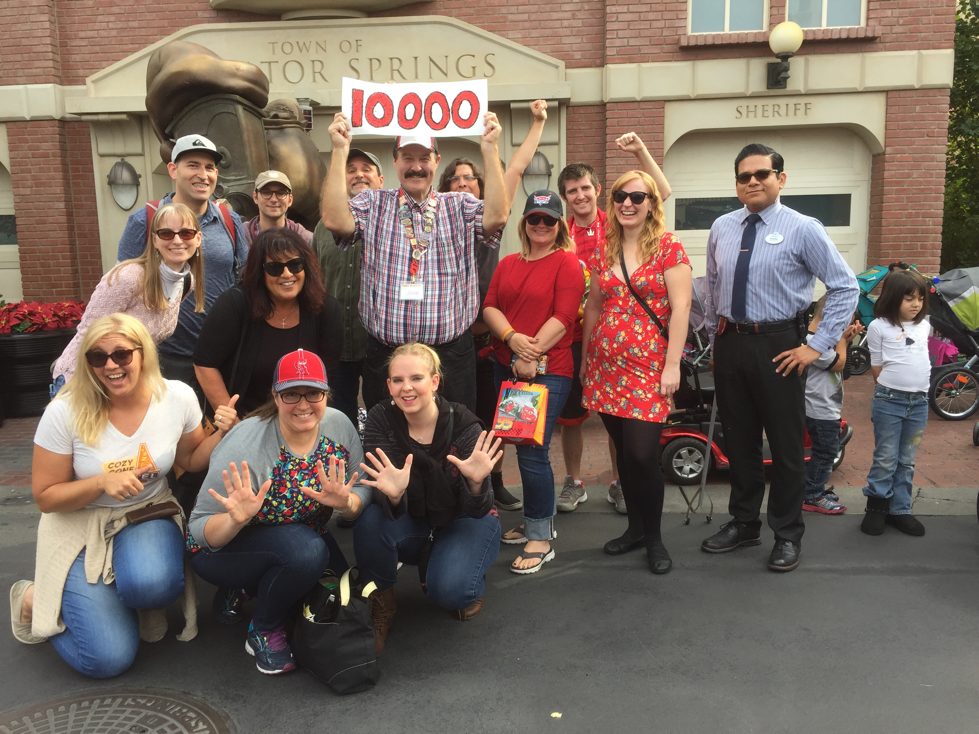 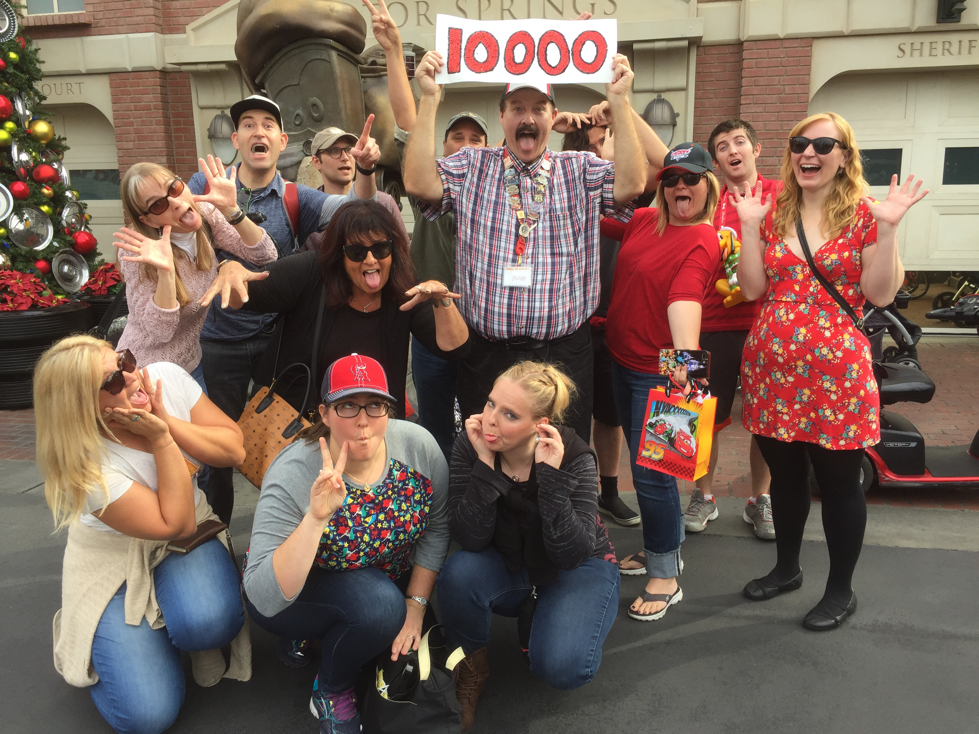 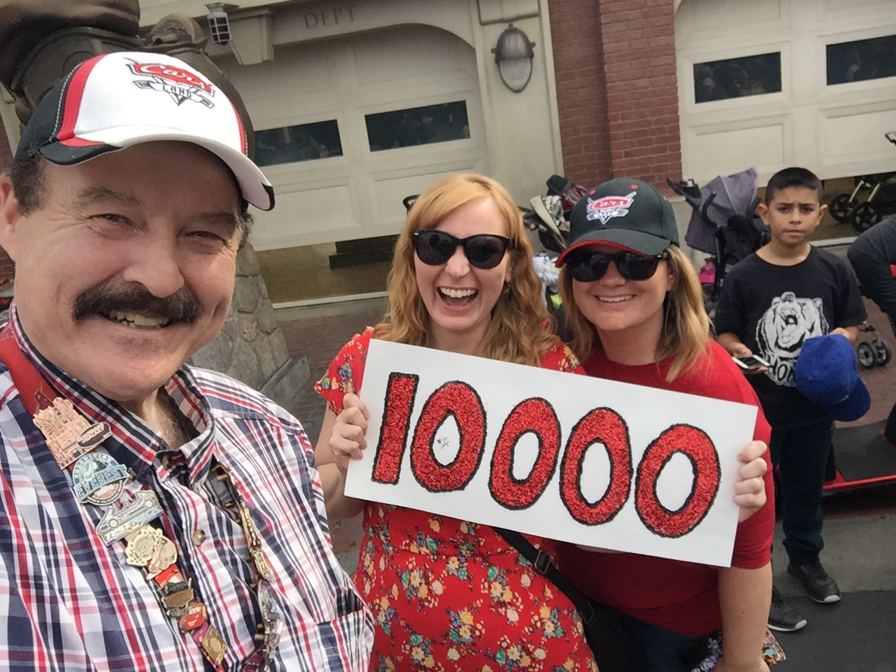 Only 1 time. Thanks ladies. 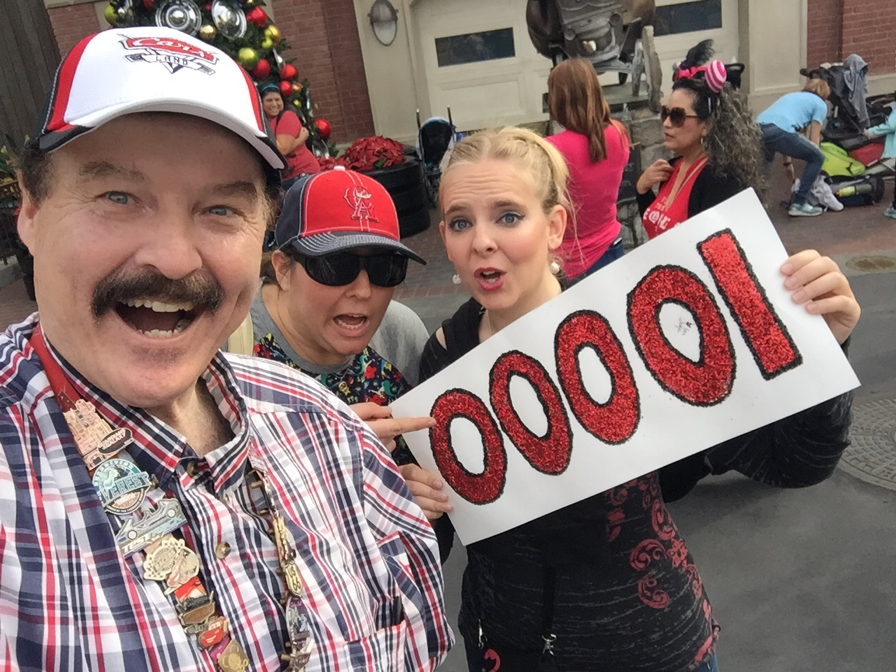 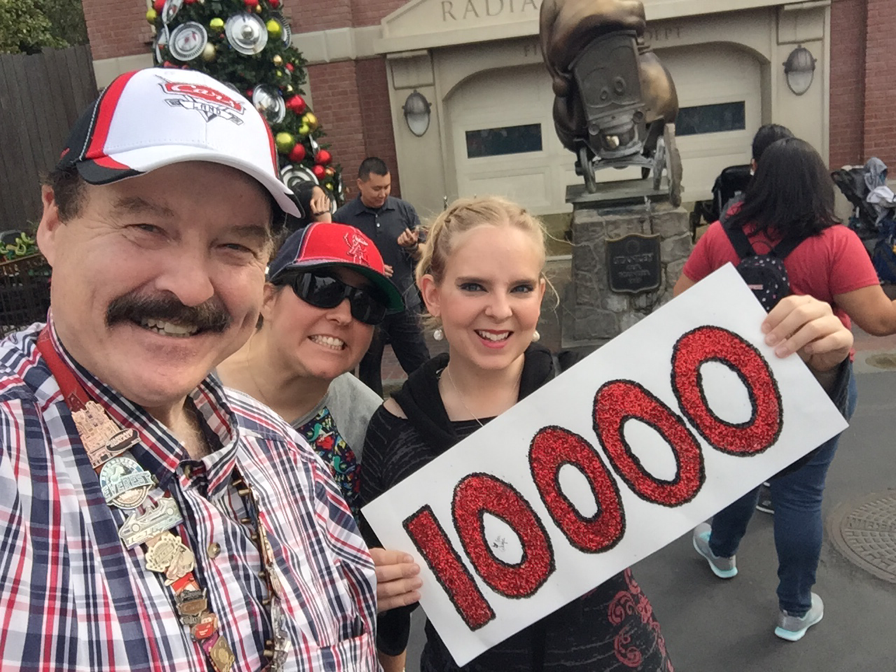 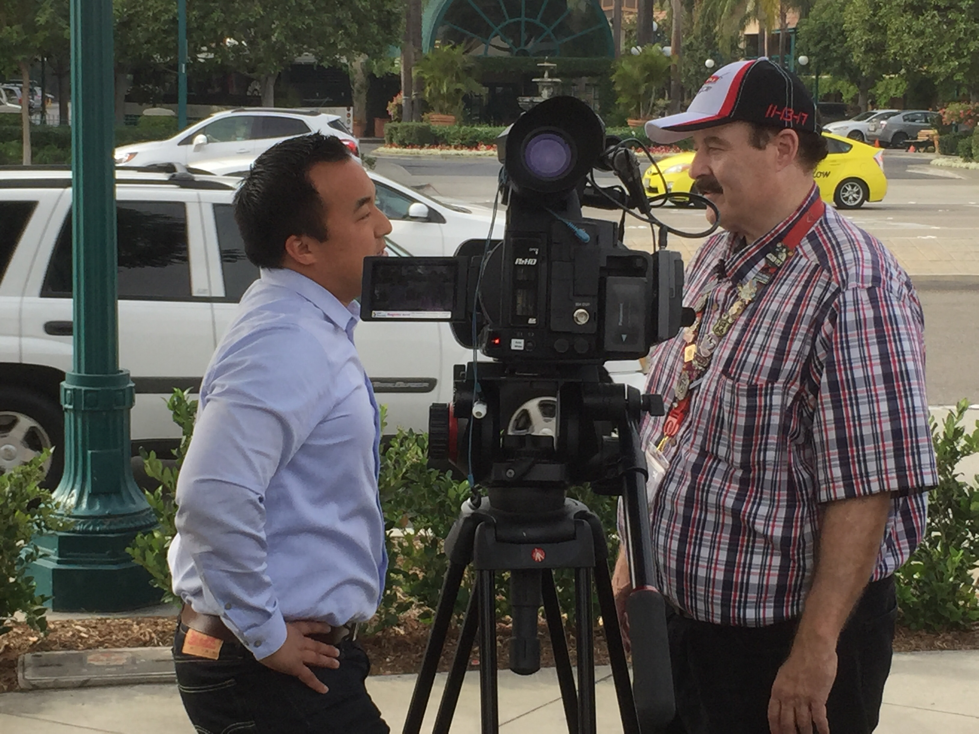 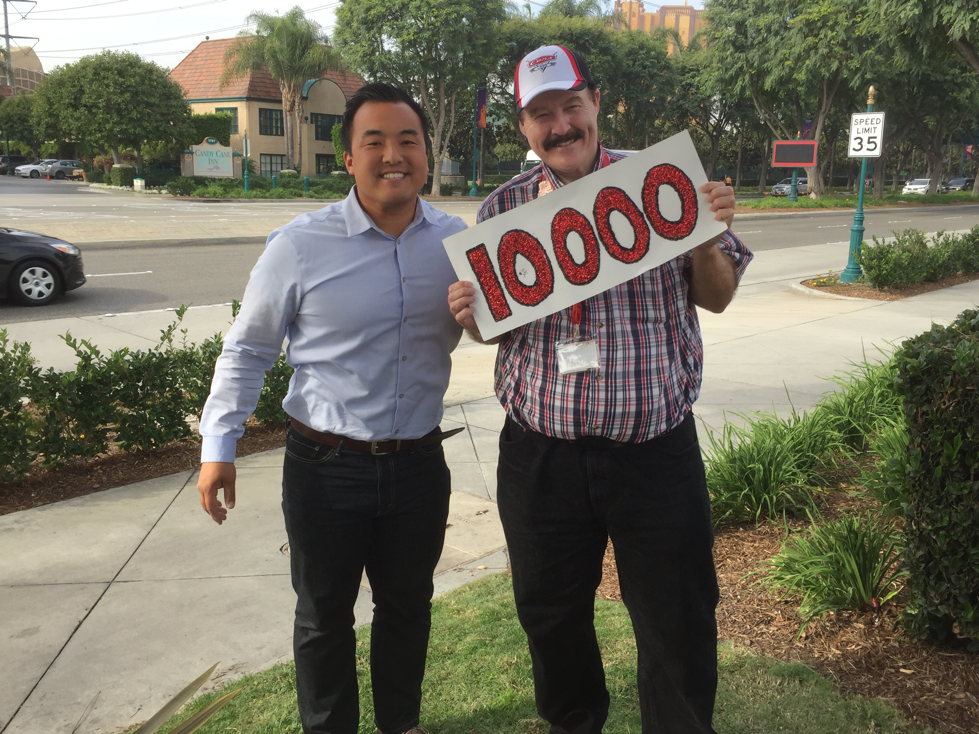